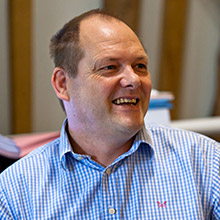 Chris is a senior consultant in the electronics and software group and is involved in all aspects of Team’s embedded design service. He also takes the role of technical lead on more complex projects, as well as keeping his hand in with detailed electronics design on smaller projects.

“Although my responsibilities are well defined, it’s the variety in my job that inspires me. On one project I will be developing an electronic interface for a handheld device, and on the next leading a team of developers, writing specifications and conducting design reviews. Another driving force is that we have a very motivated cross-functional team, so that the complex electronic subsystems I create are delivered in a device that also includes world-class mechanical and industrial design features.”

“My role also means that I have the opportunity to meet clients early on, perhaps even before a project starts, and I am able to deliver on their expectations at all stages of the project.”

Chris graduated from the University of Cambridge in 1983 and originally carved out a career within the consumer products market. He was one of the first employees at Imagination Technologies, (now a FTSE350 company with over 1200 staff), and was responsible for test development worldwide. After a brief career at Motorola, he moved to Sagentia before being appointed as hardware director at Home Wireless Networks. Since joining Team in 2002, he has been instrumental in driving the use of electronics in the medical devices market, and has delivered a multitude of embedded electronic designs for a wide range of clients.

Medelec 2011: a credible stab at addressing the embedded opportunities