Research in this field is increasing exponentially – advances in neurobiology mean we understand more than ever before how nerve cells work and how signals are transmitted. Advances in microelectronics and the recent explosion in digital connectivity has created countless opportunities to make electrical connections with the brain. Some of the more prominent applications are deep brain stimulation to treat Parkinson’s Disease, sight restoration systems using simple cameras and re-establishment of motor control to spinal cord injury patients.

The term ‘brain-computer interfaces’ has been coined to describe this exciting new area; ‘neuroprosthetics’ is also another buzzword. Such restorative treatments are potentially quite astonishing, but since each piece of new research is described as ‘groundbreaking’ it’s difficult to distinguish the real breakthroughs from reworking existing technology with a small twist to generate publicity. 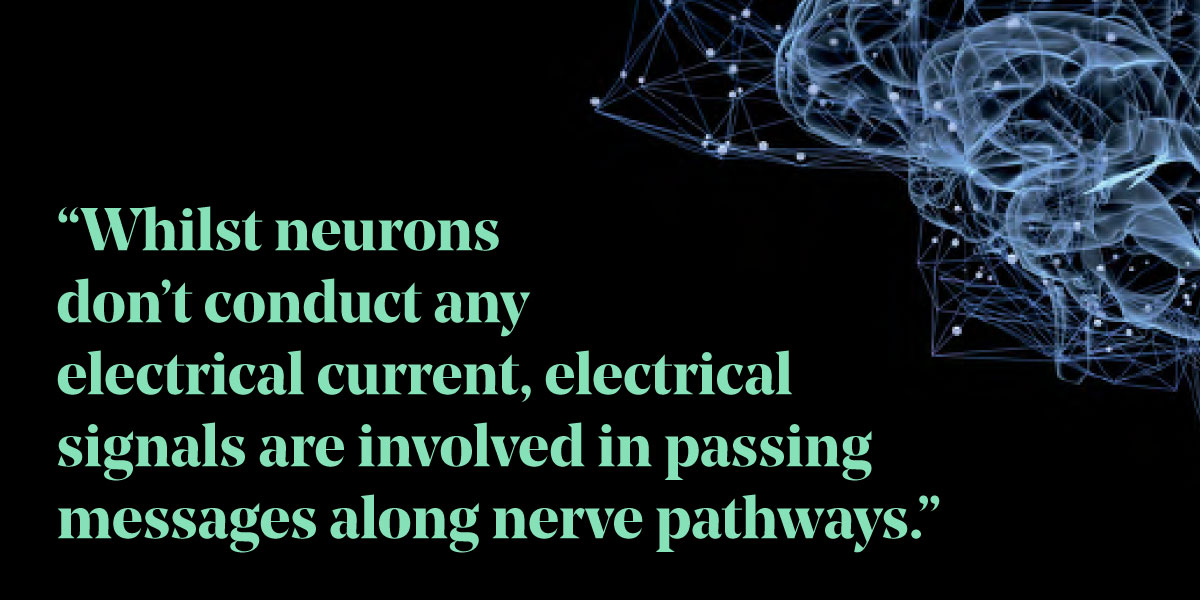 The purpose of this article is to seek to shed light on the really important breakthroughs required to allow us to connect with the brain and realise lots of wonderful things. We will look at three essential challenges to consider. Firstly, that the interface between the electronics and nerve cells is the biggest fundamental challenge. Secondly, a truly multidisciplinary approach is essential to translate clever science into impactful treatments. Finally, that academic research teams must grapple with the regulatory challenges at the earliest possible opportunity. In the following sections we will unpack each of these in more detail, before concluding with what we might expect to see reach the market in the next 5 years.

Nerve cells don’t speak electricity – unlike the entire digital world which converses in volts, amps and bits. Uniting these two different worlds is the single most fundamental challenge in creating brain computer interfaces.

Whilst neurons don’t conduct any electrical current, electrical signals are involved in passing messages along nerve pathways. However, electrical signals can be delivered to nerve cells which then pass on the message. Conversely, it’s possible to measure the tiny electrical signals from nerve signals. In either case a conductive electrode needs to be poked into the brain or placed near the nerves. This is normally a piece of metal, for example cardiac pacemakers have metal tipped electrodes, but other conductive materials such as polymers are increasingly being used. It is possible to do some of this remotely through the skin (for example an ECG measures cardiac signals through the skin and an external defibrillator sends an electrical signal through the skin to the heart) but to get well connected to the brain it’s necessary to get close and intimate with the neurons themselves. 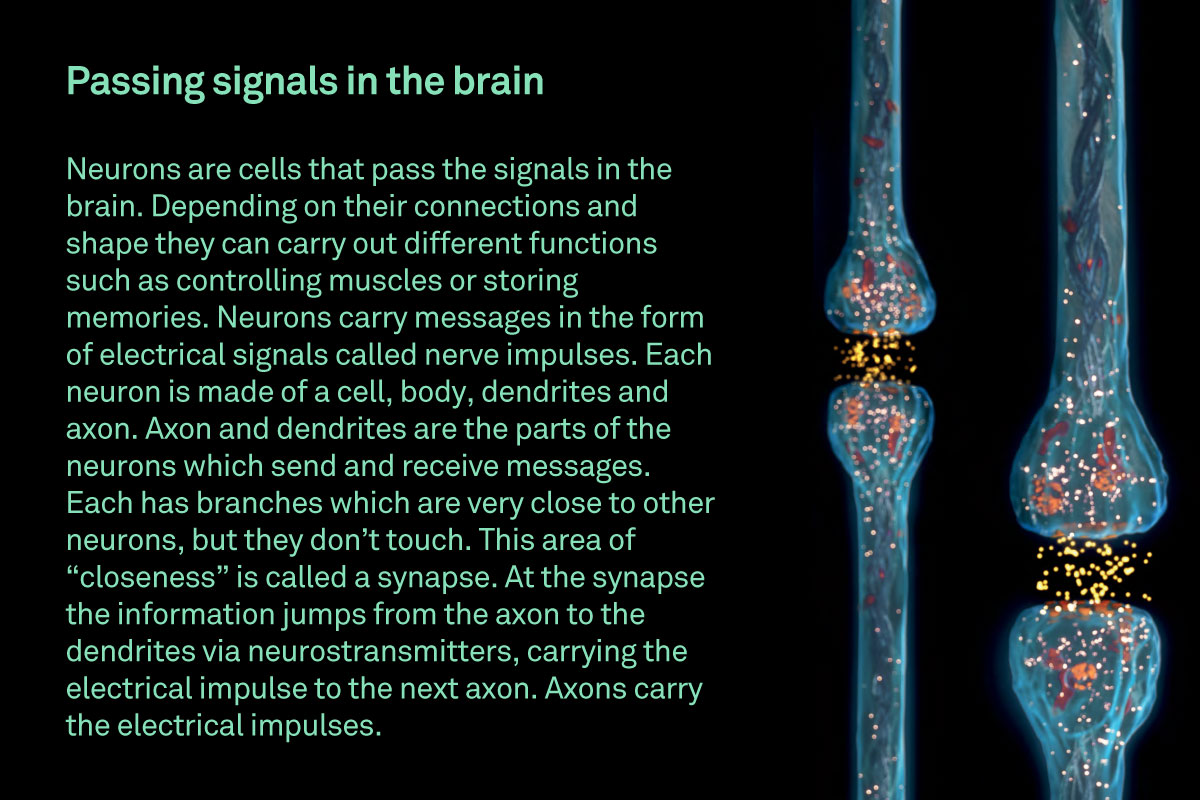 There are some very real problems with poking bits of metal into the brain. Even using fancy alloys (typically platinum-iridium), the wires can be seen as foreign by the immune system and encased in scar tissue leading to fouling or encapsulation, which prevents good transmission of the electrical signals. An even bigger challenge is increasing the resolution of connections into the brain – making a larger number of electrical connections to smaller, discrete three-dimensional areas of the brain. In the early days researchers were satisfied placing a few electrodes into different parts of the brain, but as the science moves forward there is a demand to make larger and larger number of connections to obtain greater and greater precision. This throws up two problems. The first is how to fabricate such complex arrays, though modern fabrication techniques (such as additive manufacturing technologies) enable quite complex structures to be created. The second and more intractable problem is how to place a 3D electrode array into the brain without severely damaging the bit of brain you’re interested in. Even if a complex three dimensional array of electrodes can be put into place, the wires connecting each electrode have to go somewhere and will inevitably cause some physical disruption to the brain tissues which they pass through.

Some clever work is being done to better integrate microelectronics with neurons. For example, the UK start-up Neuroloom is using microfabrication techniques to create an array of tiny, hollow needles, into which nerve cells can be grown. It is hoped that this will help create higher resolution interfaces in which the nerve cells are closely coupled to a conductive support structure, thereby improving the electrical coupling between the electronics and the cells. This field is in its infancy, but it seems plausible that ‘collaborating’ with neurons is likely to yield better results in the long term than simply forcing them into close proximity with foreign structures. 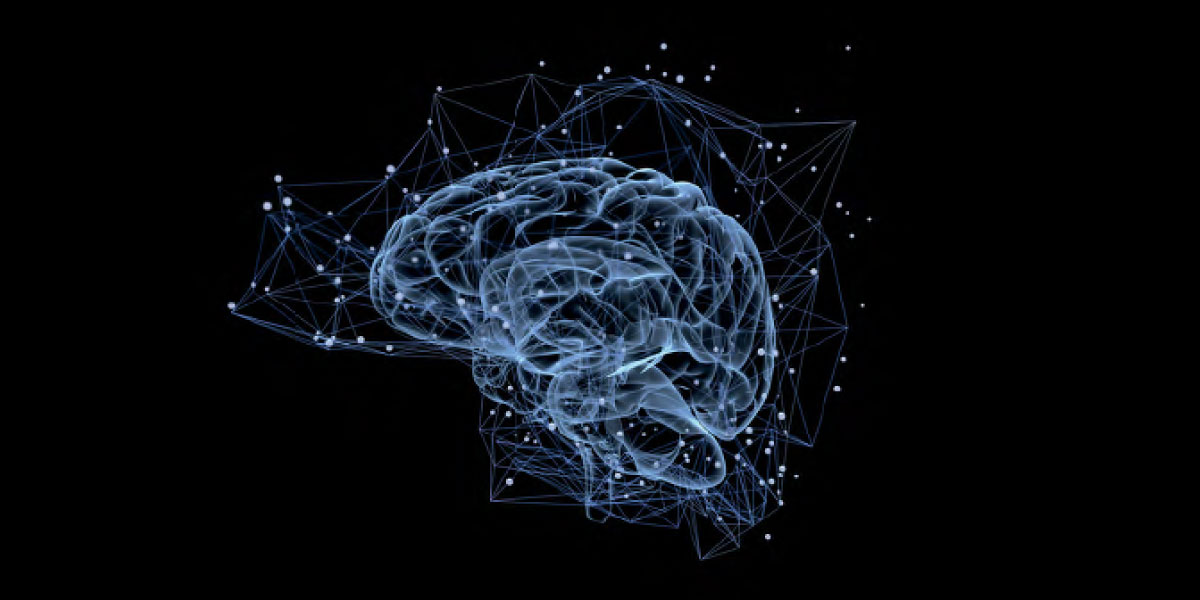 Neuroloom is a good example of multiple disciplines (in this case microfabrication, cell biology and micro-electronics) working collaboratively to solve the challenges of interfacing with the brain. Connecting microelectronics to the brain and making products which can advance science and help patients is an inherently multidisciplinary subject. It requires input from experts in the fields of physiology, cell biology, electronics, computing, user interface design and mechanics.

We’ve already discussed the electronic-neural interface, but deep understanding of many other fields must also be brought to bear. For example, the microelectronics often need to detect the most faint of electrical signals against a background of other ‘noise’. The electrical systems often need to be miniaturised and designed to reduce power consumption; inductive powering and communication through the skin may also be required.

All successful therapeutic products need a well thought through user interface / physical interface, but sadly this aspect is often overlooked because the emphasis is on the clever science. It is essential to bring these skills into the multidisciplinary team. Investment in design research, human factors testing and consideration of the user interaction is always a good investment for any medical device, not least something which is connected to the brain. 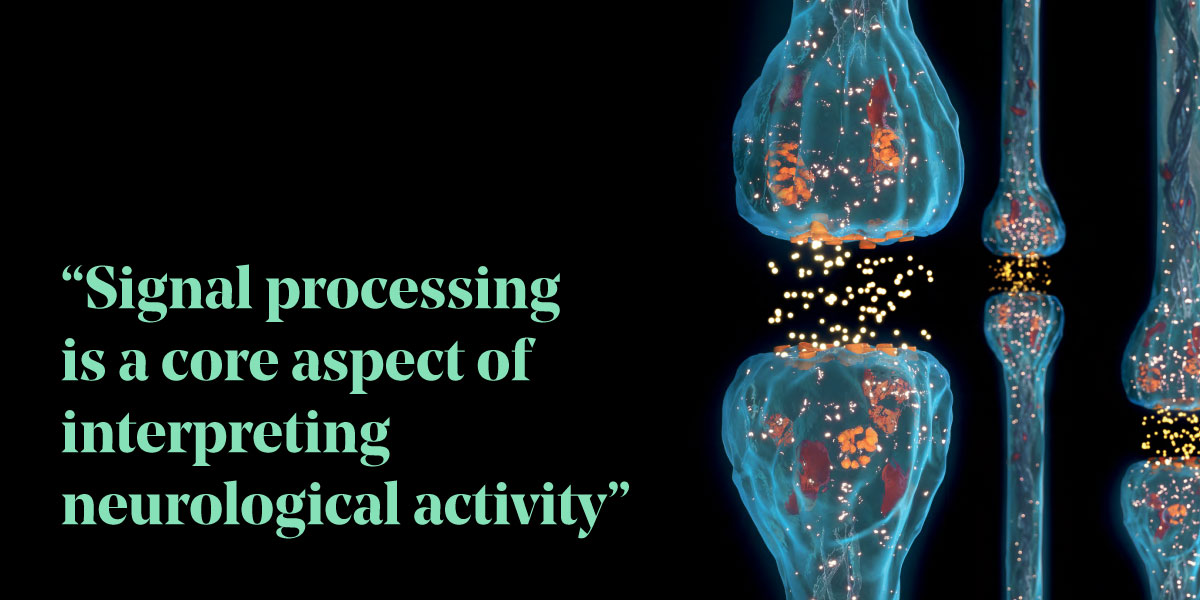 Signal processing is a core aspect of interpreting neurological activity; much has been published in this field, but it still requires in-depth knowledge to select appropriate algorithms which can be verified and validated to satisfy the requirements of regulators. This is an area in which an understanding of medical device regulation and development of medical software is utterly essential. It isn’t uncommon for research groups to demonstrate proof-of-principle in the clinic using bespoke signals processing algorithms, only to have to rewrite the software with the required sufficient rigour, documentation and quality management to be acceptable to regulatory bodies. Again, the advice is to bring together the range of required disciplines earlier rather than later in the process.

The regulatory challenge is something that can’t be stressed too highly. It is difficult for those who don’t work in the regulated environment to comprehend just how much time, effort and rigour is required to document that the design, manufacture and use of a system is sufficiently safe for routine commercial use.

It can appear an impenetrable world of endless standards, guidance documents, acronyms and 5 digit numbers – compounded by differences between regulators in different geographies – most commonly the FDA in North America and the Medical Device Directive / Medical Device Regulations in the EU. However, all that’s required in the first instance is an understanding of the basic principles of medical device regulation, accompanied by some expert advice from one of many independent regulatory affairs experts.

So, it seems that the major breakthroughs in modulating the nervous system and connecting the brain to the digital world won’t come about simply through clever app design, 3D printing something or using the latest 3D spectacles. Don’t be fooled by these apparent breakthroughs. I’m not denigrating this work – this creativity and application of technology will be important, but such innovations on their own won’t be enough. The real winners will be those who are willing to get stuck into the complex, unpredictable realm of neurobiology. They will be willing to draw together experts across a range
of disciplines, to look beyond the next clinical study and consider all the issues which a routine clinical therapy or diagnostic tool will face.

In the coming years we will probably start to see deep brain stimulation playing a role in managing Parkinson’s Disease. Implanted peripheral nerve stimulation techniques are growing in credibility. It was a sketchy area for some decades but evidence is growing that nerve stimulation (sometimes termed ‘electroceuticals’) can elicit some measurable and meaningful therapeutic benefits, such as modulation of TNF (Tumor Necrosis Factor) as an alternative to anti-TNF therapy. 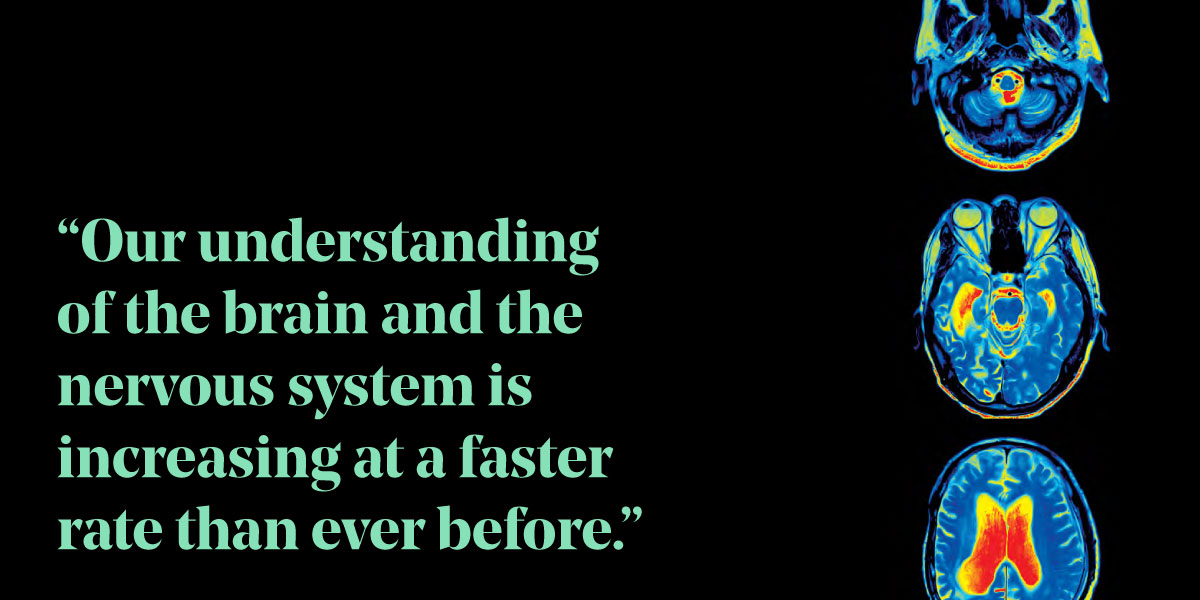 The more fantastic treatments such as digital retinas will probably remain in the research domain for a decade. However, limb prostheses which are controlled by brain activity, albeit using external electrodes, will gradually begin to become the norm.

We live in exciting times. The mammalian brain is arguably the most complex object in the universe and we still have a lot to learn about it but our understanding of the brain and the nervous system is increasing at a faster rate than ever before in human history. Ultimately though, it may be cost and regulatory apprehensions rather than understanding which place the greatest restrictions on progress.

This article is from Insight, our twice-yearly magazine all about healthcare and medical device development. Click here to get your free subscription. 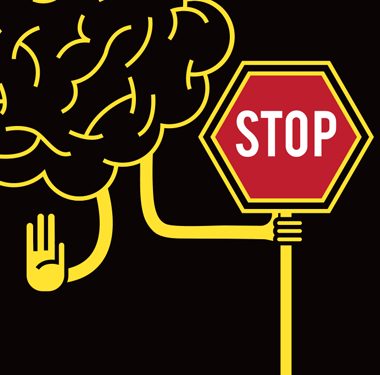 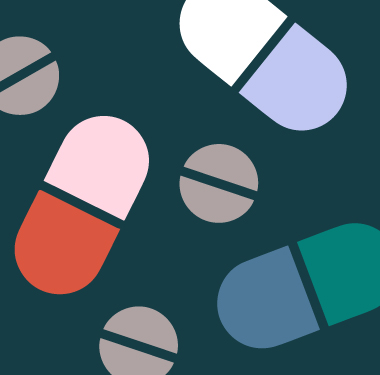 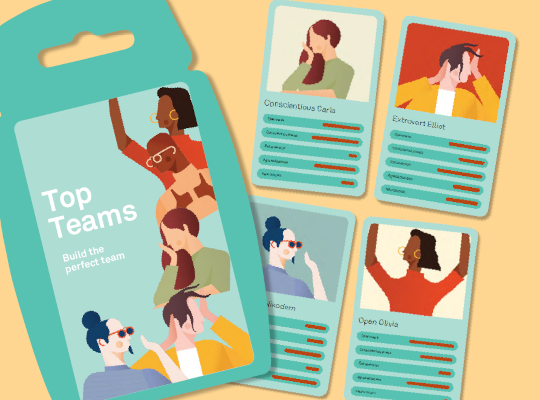 How to build the perfect team